(Shanghai, 26th April 2021) At 9pm local time on April 25th, the large screen on the building of 28 Liberty in New York City was lit up with the prominent message “ZERO MALARIA STARTS WITH ME”. In the next hour, many visitors passing through stopped to watch the messages displayed, and to make video clips filled with their good wishes for malaria patients around the world. 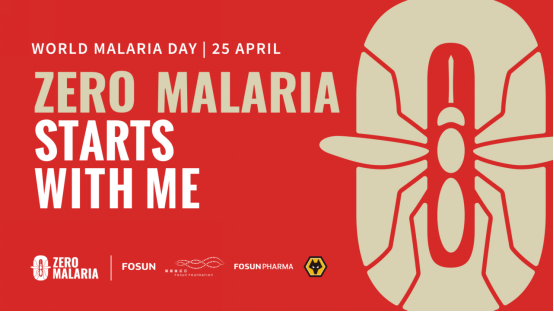 April 25th is “World Malaria Day”. This year, WHO and partners will mark World Malaria Day by celebrating the achievements of countries that are approaching – and achieving – malaria elimination. They provide inspiration for all nations that are working to stamp out this deadly disease and improve the health and livelihoods of their populations. Following closely April 26th is China’s “National Malaria Day”. And this year, the emphasis is on the ‘Preventing malaria transmission and consolidating malaria elimination achievements’. On April 25th the slogan “Building a malaria-free world” was displayed on the advertising screens of several landmark buildings worldwide, including Shanghai the Bund Finance Center, New York 28 Liberty, Japan Kyoto and Hiroshima EN Hotel, Atlantis Sanya, The Bund Fosun Center, YOSUN Wuhan International Fashion Center, Shanghai Forte Woli City, Forte Changsha Starshine World, Chongqing Fosun International Center, and Jinan Fosun International Center. The aim of the ‘Light up the Landmarks’ campaign is to arouse the public’s awareness of malaria. In Shanghai BFC Bund financial center, the “Zero Malaria” message was displayed on 147 digital monitors in the public area. A tourist commented that it was the first time he heard about malaria, which is a life threatening infectious disease - and like Covid-19, it is a major global public health problem. 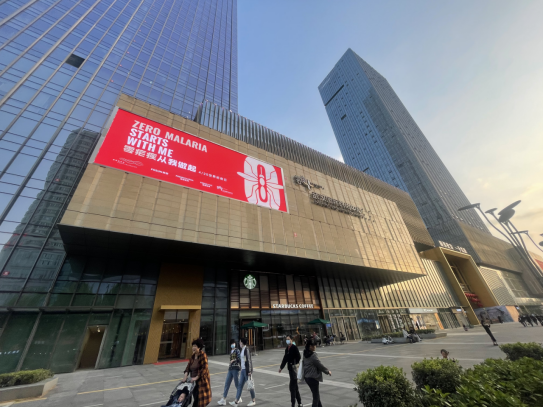 On April 25th and 26th, Shanghai Fosun Foundation (hereinafter referred to as ‘Fosun Foundation’) responded actively to the “Zero Malaria Starts with Me” campaign initiated by the World Health Organization and the “RBM Partnership to End Malaria”. With cooperation with Fosun Pharma, English Premier League’s Wolverhampton Wanderers FC and Fosun Hive, a series of public welfare activities were carried out around the world to call on the public to join together to the fight against malaria.

“Malaria is an entirely preventable and treatable disease. Yet malaria kills. Still relentlessly”, Wolverhampton Wanderers FC player Raúl Jiménez said in a short video, as he pointed out the ruthless status of this disease.

At the match between Wolverhampton Wanderers FC and Burnley FC on April 25th, the slogan “Zero Malaria Starts with Me” was displayed on the sidelines. The Wolves players also wore a special designed warm-up T-shirts printed with the message. At the same time, the short video in which eight Wolves players participated in was also broadcasted before the game and was released simultaneously through their official social media. In the video, Jimenez and the players called on everyone to take malaria prevention and control measures seriously. For example, in malaria endemic areas, insecticides and nets can be used to protect people from mosquitoes. They also emphasized that malaria prevention and control is as important as the coronavirus protection measures. Players also warmly reminded everyone in the video: If you have symptoms of malaria, do not hesitate to see a doctor immediately! 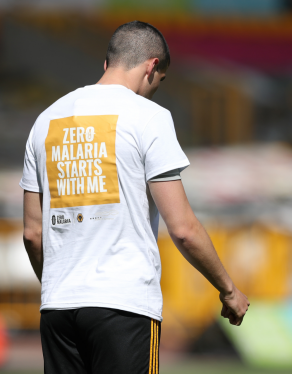 In recent years, the international community has gradually paid more attention to malaria control. Artemisinin based antimalarial medicines as well as a variety of effective prevention and control measures have since been deployed globally. In the last two decades, malaria has disappeared in twenty-four countries and regions around the world. With the growth of the public’s awareness of malaria prevention and control, it is no longer a distant dream to end this disease from a bygone era that has plagued humankind globally since the dawn of time.

“From now on, come join us in the fight against malaria together with the Fosun family and Wolverhampton Wanderers FC.” At the end of the video the players also mentioned, “We can be the generation to end malaria.”

From a painting, seeing the world through the eyes of an African child

Through pieces of pictures, the carefully drawn images echo the African children's vision of “A malaria-free world”.

What used to be a bustling village is now empty, the streets are filled with garbage that consists of drink cans, fruit peels and plastic bags. The pond is no longer as clear as it used to be, with the sewage emitting putrid smells. Mosquitoes swarmed noisily looking for their next victim.

This is his memory of Christopher Abiodun Godsgift’s hometown, who is a 15-year-old Nigerian boy. In the past, the terrible environment allowed mosquitoes to breed tremendously, which resulted in malaria epidemic locally. Coupled with the poor healthcare conditions, it was difficult for malaria patients to get timely and proper treatment. 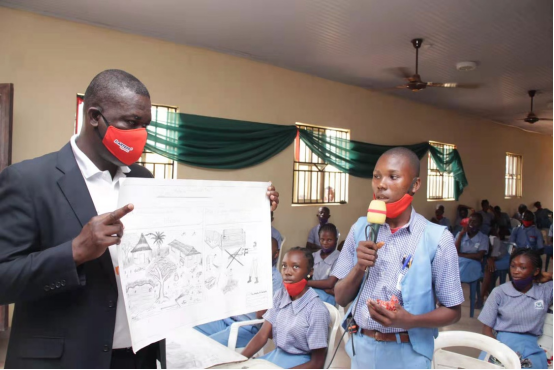 On April 8th, sixty students from Ianmode Grammar School in Nigeria attended a special ‘life class’. As of 2019, approximately 191 million Nigerians have lived with the threat of malaria, accounting for 97% of the total population (source: WHO World Malaria Report 2020). Taking into account of the lack of basic public health education there, Fosun Foundation, together with Fosun Pharma, organized a lecture about malaria, covering topics such as malaria transmission, symptoms as well as prevention. Furthermore, $1,500 USD was donated to the school for renovation of the school's infirmary.

After the lecture, the students were encouraged to use pens and pieces of paper to describe their imagination of ‘A malaria-free world’. Okon Victory Anietie, aged 16, painted the life she dreamed of - with the help of antimalaria medicines, her little sister, who is bedridden with the illness, soon regained her health and vitality.

On April 15th, The Beacon International School in Ghana also organized the “Draw a malaria-free world” project, and exhibited the students’ works in the school after the competition. The students hoped through their paintings more children can learn the importance of malaria control, encouraging the young generation to take action to prevent themselves from malaria, protect the ecological environment and finally to seek for correct malaria treatment. Just as Christopher visualized in his picture - a malaria-free future starts with a clean world. Together, we can work to end malaria.

China used to be a country that reported more than 30 million cases of malaria annually in the 1940s. Sixty years later, it registered zero indigenous cases in 2016, and has stayed at zero for four years till now. China applied for the WHO malaria-free certification in 2020. Tu Youyou, a Chinese scientist became the first person to develop a new technology of extracting artemisinin through ether. Based on such achievement, a series of artemisinin based new antimalarial drugs, including China’s x-01 new drug Artesunate were developed and put into use, which has tremendously improved the treatment of malaria in human history.

Furthermore, Fosun is persistent in the fight against malaria. Since 2005, 24 anti-malarial medicines developed by Fosun Pharma have been pre-qualified by the World Health Organization. To date, more than 200 million vials of Artesun? (artesunate for injection) have been supplied to the international market. Those Artesun? are estimated to help save over 40 million severe malaria patients, among which most are children under the age of five in Africa.

With the improvement of global public health and the global deployment of artemisinin based antimalarial medicnes such as Artesun?, the number of countries and regions with fewer than 100 indigenous malaria cases (a strong indicator that malaria elimination is within reach) has increased from 6 to 27 between 2000 and 2019.   However, sub-Saharan Africa is still the high burden area. In 2019, there were 225 million cases and 409,000 malaria-related deaths in 87 countries. Children under five in sub-Saharan Africa still account for about two-thirds of global malaria deaths. Sadly, one child in the world dies of malaria every two minutes (Source: WHO website).

In 2020, Fosun Pharma joined forces with Fosun Foundation to donate $200,000 USD worth of personal protective equipment to the Ministry of Health of eight African countries such as Cote d’Ivoire, Mali, and Kenya. The donated PPEs included 200,000 pieces of surgical masks, 1,400 sets of forehead thermometers and 230,000 pieces of medical gloves. Those materials were used for the daily protection of front-line medical staff and healthcare workers in these countries to help them achieve the target of malaria prevention and control during the Covid-19 pandemic.

“As a partner in the fight against malaria for China and the world, Fosun consistently commits to providing more cutting-edge solutions such as innovative medicinal products and global resources for malaria management and control. We will join forces and resources, and work together with malaria scientists as well as healthcare professionals to continue to carry out malaria education projects for the public, so as to leverage people’s awareness of malaria prevention. We will actively participate in public health improvement and make steady efforts to build a malaria-free world.” Guo Guangchang, Chairman of Fosun International expressed.

On 2021 World Malaria Day, the English Premier League Wolverhampton Wanderers FC called on fans to join efforts to end malaria. Far away in Africa, the children drawing a malaria-free world using pen and paper. Landmarks around the world also lit up with anti-malaria messages. Despite the distance, our common wish is the same. In future, Fosun will continue to deliver high-quality products to the healthcare front-line worldwide, and to provide medical support for patients surviving from a disease. In this journey, Fosun will also dedicate to “working together to build a malaria-free world”.